In fantasy architecture I have seen all variations of human towns and castles made. But for other fantasy cultures there is not that much there. We’ve got the good guys covered. But what about the bad guys? What about the Orcs!

For some time now I wanted to create a range of buildings for this fantasy race of fierce warriors. So what do Orc buildings look like? When J.R.R. Tolkien invented Orcs in his books unfortunately he did not tell much about how they lived. Even in the movies I don’t remember seeing much more than a couple of shaggy tents in Mordor. But luckily Tolkien inspired the RPG (role play gaming) community and from it’s pen and paper roots to modern computer games it developed many ideas and visual concepts from which I started to draw my inspiration.

It seems to be understood that orcs, being this raw, savage and primitive people, made their dwellings out of similar primitive materials they would find in nature: rough-hewn tree logs, (rawhide?) leather, straw and reeds for a thatched roof, simple rope and stone. Some franchises even feature huge tusks and bones from ancient creatures like mammoths and dinosaurs. Depending on the age you set your orcs in (prehistoric stone age or the fantasy medieval times) one could also add metal to the list.

The shapes of the orc buildings I derived from nomad tents. This lifestyle so close to nature, gathering and hunting until you have to move on to find new territory to harvest from, seems very fitting for Orcs. The oldest version of tents I have found are the simple camps found in prehistoric times, where leather rags were layered over a framework made out of branches or bones. 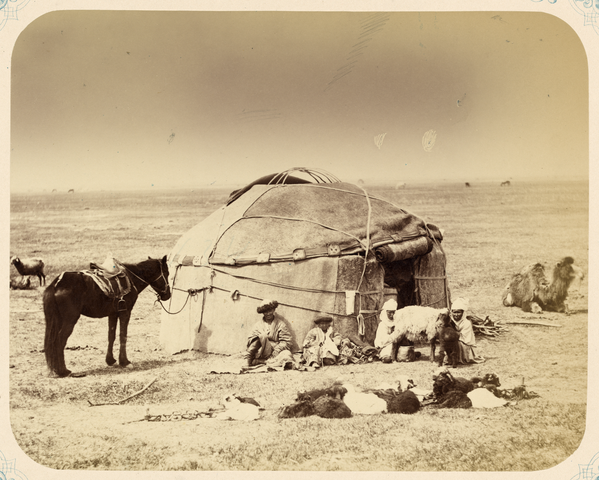 Putting this all together I started forming these shapes and adding to them spiked features and ornaments, representing the toughness, wild nature and danger of orcs.

For detailing and ornaments I settled for the spiked logs and tusks. I might add some skulls and bones later for further detailing.

I imagine a simple orc hut to look like this. A couple of branches driven into the ground and some leather or canvas wrapped around them. The tent could be covered, but I placed my orcs into a hot, dry land where rain barely falls and dinosaurs roam at night!

A bigger orc building would look like this. Gone are the nomad days of moving across the country and this house has a rough stone foundation. The roof and walls could be made of leather patches sewn together as shown in this image. But easily the house could be made out of wood walls and a thatched roof. Any material that you like and makes sense is possible in the fantasy worlds 🙂

I made this interior view, because I wanted to know how the slanted logs would be held in that position. I think this could be one version how it works.

I will continue my research with tools and weapons that would have been used by these wild warriors. The prehistoric stone age and also the iron age should provide more than enough clues to inspire me with detailing the buildings.

This site uses functional cookies and external scripts to improve your experience.

NOTE: These settings will only apply to the browser and device you are currently using.

We are using cookies to improve the usage of this site.